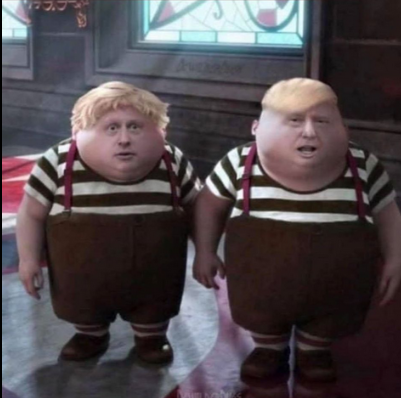 Well the two stodges Boris Johnstone the man that was said to have Covid-19 and the Donald Trump that wishes he had it, tries his hardest to get it so he can hide away from dominant female reporters that remind him so much of his mother Mary who must spin in her grave everytime he opens his gob in public.

Here we have the two great leaders the world looks on to solve problems and the only thing we all know for sure now is both are as dumb as each other!

It seems they only care about their own bank balances and that of their supporters and who gets to do all the work the poorest which shows their true colors and both cant be trusted to make the right moves.

The 2 highest countries with the highest death tolls shows they dont have a clue unless they wanted the deaths to happen as both leaders had mounting care problems this solves this problem hands down?

Boris and his scumbag buddies cant even argue their case with GMB every morning, chickens has more morals.

They both failed their countries and should fall on their swords and go and take their numpties with them.

Notice: Trying to get property 'files' of non-object in /home/smart360/internationalscotland.com/wp-content/plugins/w3-total-cache/CdnEngine_GoogleDrive.php on line 595