SPOT THE DIFFERENCE BETWEEN 28 AND 32 HOOLE ROAD CHESTER.

Here we have in a nutshell why we think James Beresford, Charlotte Pritchard, BLM LAW, Bartletts of Chester, SDL and Charles Parker Bennett were all up to their necks in a conspiracy to commit legal fraud in a estate price fixing scam at 32 Hoole Road Chester.

As luck would have it or should we say how unlucky the above individuals and companies are we can can now map how easy it is for probate lawyers, estate firms and RICS personal can all be used to influence high courts they are right and all objectors can and will be proven to be wrong!

If you look closely below in this graphic it clearly shows how bad is case we have been covering for many years actually is, it shows a recent property on sale quite correctly at 28 Hoole road, Chester by estate agents Savills UK at Offers Over £740,000 for 5 bedrooms, 2 bathrooms we think its brilliant value and a great bargain? 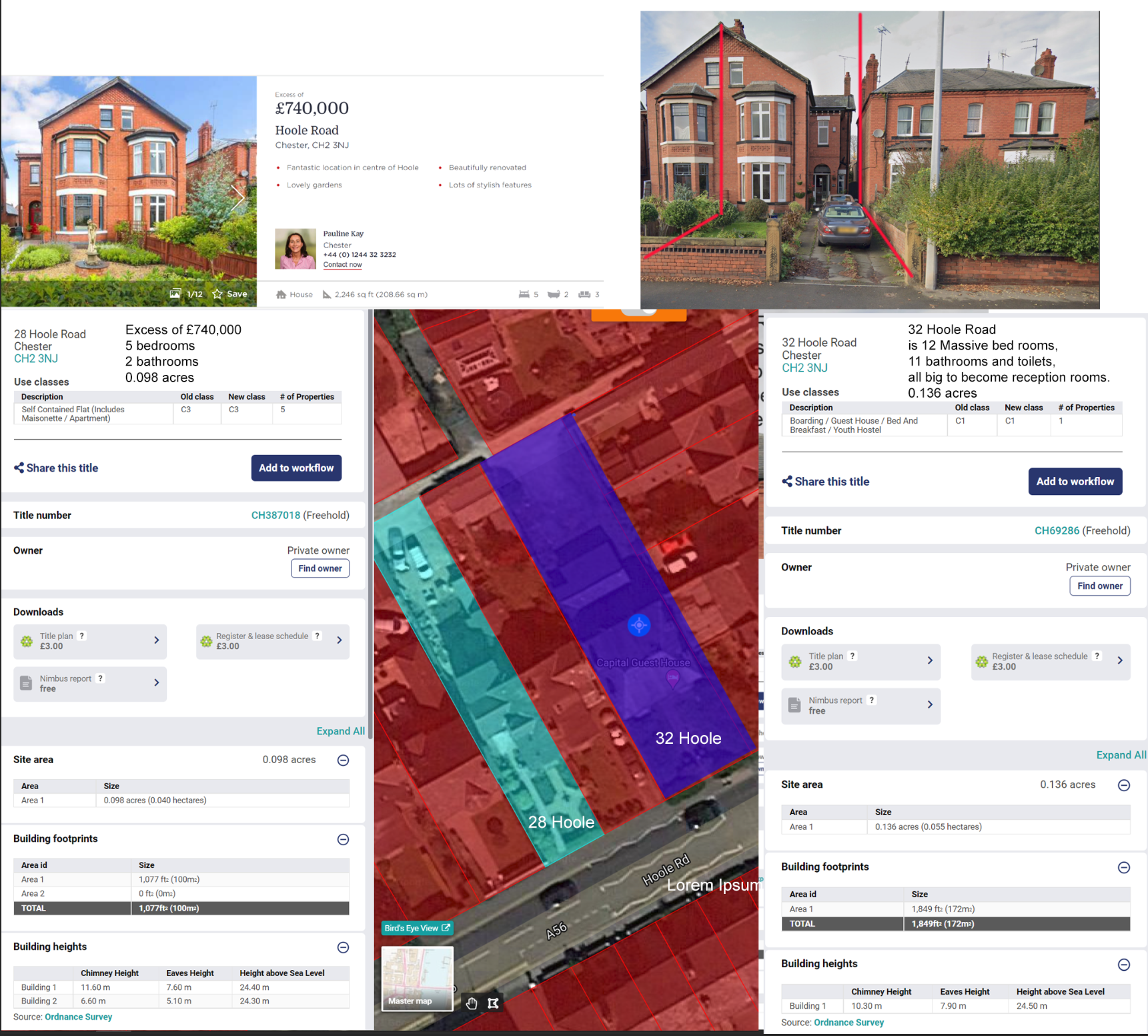 Spot the difference with 28 and 32 Hoole road Chester image.

Now when compared to 32 Hoole road Chester, both Bartletts of Chester in 2015 and James Charlotte of BLM Law 2021 valued it at just £450,000  even though the property has 7 bedrooms extra and 8 bathrooms extra and a much larger property footprint makes no sense at all?

BLM Law wealth managers and probate experts are supposed to maximise the value of the estates value not decrease it by two thirds its actual value tells the real story that even a dodgy court could not ignore?

Let’s not forget Bartletts office is basically across the road the first removed executer because he got caught trying to put a 100k care bill on the property that was in actual fact was only less than 10% that sum shows how corrupt he was or how utterly incompetent he and his firm really are and the SRA says nowt!

Then we have SDL who at first stated it was worth £570,000 when Town and County stated £800,000 but instead of going with Town and county James Beresford very strangely when with the cheaper option of SDL auctions at a starting price of £450,000 but internally SDL started to smell a rat and refused to sell it so low.

So this proves JB and BLM was up to their necks in price fixing and protecting Bartlett’s 2015 CASE, not to mention Beresford took very strange actions unheard of in modern day legal history he found out there was 2 £1m pound bids and the main beneficiary of the estate was trying to remove him in a London court he enter a PERSONAL CAVEAT into the Leeds probate office to block the said sales and when the buyers contacted BLM directly we can prove PB of Bartlett’s Chester told poor James NOT to except the bids damaging.

Many honest solicitors reading this blog must be shocked at reading the above but it gets worse JB also put in a RX1 in the land registry for extra protection and making absolutely sure he and his friends would not get gazumped or pay over their odds to get the estate cheap!

But JB required more proof incise he got caught out swindling this estate he asked a RICS firm 62 miles away for a dodgy low valuation its now known its over 300% less than its true valuation that other local RICS firms in Chester claims its a valuation of legal fraud and JB and BLM law Compliance used it in a 9th of August legal bundle with surveyor signature removed *we say covered up) he now knows hes in trouble has resubmitted the document with the correct signature on the original document and now claims it was a fraudulent valuation as it was far to low at £345,000, who are they trying to kid on?

SDL rightly pulled the plug on the sale but its very strange JB is not telling the court there was a live bid of 500k on the table so if it was a real bid did the pay the bidder compensation?

Why did they not tell the court the reason why SDL auctions pulled the plug, well we think we know the reason.

At the final settlement at Liverpool high court the estate had to sell for at least 750k yes JB CP BLM and SDL totally ignored this court order in June this year but it seems SDL was not told this in fact  BLM law told SDL just to ignore the order as they were working with the courts to resolve this and carry on.

SDL got cold feet when they found out a London high court stated anyone who sold it for less would have to pay damages if it sold for less than the court order stated but of course BLM does not want to tell the courts any of these facts do they?

SO WE HAVE THE PERFECT PROBATE CRIME SCENARIO.

All you need is a few dodgy solicitors and law firms that plans to sell the property cheap to themselves or friends make sure you control the wills, doctors of the deceased to be (possible conspiracy to murder) in this case involver the convicted paedophile Dr Bland who we know lied at the deceased’s corner inquest that will have to be reopened.

Dodgy RICS Surveyors willing to undervalue estates to order and why did BLM law use a surveyor’s firm that generated less than £10,000 in business that entire year with 1 employee on the books that no one has ever heard of and leaves his job right afterwards with a single director no one in this office knows and you have the perfect alibi of NOTHING TO DO WITH ME GOV written all over it.

So here we are JB and BLM Law caught again and back in court trying on hope the greatest probate and wealth manager wont get removed of course we are now over 1 year and all he says is the valuation was far to low but why did he not correct this and get real experts like Aviary’s in Chester to do an up to date valuation we hear you all say well then we would know the truth and nothing but the truth so they will kick and scream its not required but the court should have one ordered but will they is a massive  question?

One thing for sure this is heading towards the supreme court and these questions will all be questioned and answered!